You can repeatedly vacation in London and follow a new itinerary each time. For our seven days there, we chose to visit some of London’s landmarks and by sheer luck encountered some unforgettable surprises along the way. With its fusion of peoples, foods, music, art styles and languages, London reveals the positive nature of multiculturalism.
We flew into London on a two-hour EasyJet flight from Valencia. Our vacation home host, Driton, met us and helped us get oriented. We stayed one block past Essex Road close to the Islington and Highbury Underground station. A nearby supermarket supplied us with food for breakfast at the apartment and a packed lunch so we could have an impromptu picnic each day.
Free entrance into the National Gallery provided an afternoon of viewing a world-renowned collection of art including sunflowers by van Gogh, bathers by Monet, and cousins Jesus and John by da Vinci.

A walk through Camden Town’s many small, cobblestone streets led us to vintage shopping, Amy Winehouse and a walk along the canal. The Polish food @highlander.game brought back great memories of our trip to Krakow last year with their pierogies and half-metre sausages. 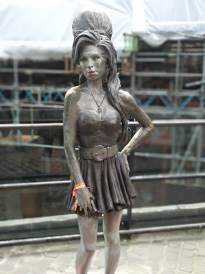 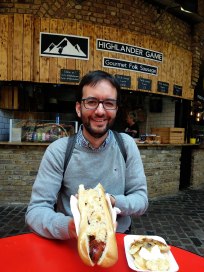 Polish sausage
A short walk from Camden Town led us to an unobstructed city view at Primrose Hill.

For Harry Potter fans, a visit to Warner Bros. Studio Tour London – The Making of Harry Potter seems mandatory. Even for those of us who don’t know all the rules of Quidditch, it’s an inspiring excursion. While it sounds like it might be an amusement park, it’s actually the studio sets and props used for filming the movies. You can’t help but be impressed by the level of detail used to create everything from hundreds of handmade bottle labels in Snape’s potions classroom to the realistic Diagon Alley streetscape. It’s also interesting to learn their tricks for using computer generated imagery to bring the fantasy of Hogwarts and wizards alive. Because these tickets sell out quickly, we bought ours online several months ahead of our visit.

One could probably admire and read the exhibits in the British Museum for months. It’s unbelievable the trove of historical items that they’ve collected. Based upon the crowds, the ancient Egypt exhibit wins the “most popular” title. However, you can easily view other antiquities without crowds around you. It was incredible to reflect upon objects like the Rosetta Stone, an Easter Island statue and Parthenon sculptures that record the history of humankind. 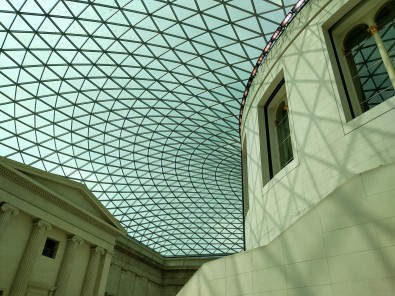 Needing a break from history and museums, we spent one night out in Covent Garden. Although we previously attended a Mamma Mia! production, the second time at the Novello Theatre was just as fun and danceable. We bought the tickets online in early March for our mid-July visit. 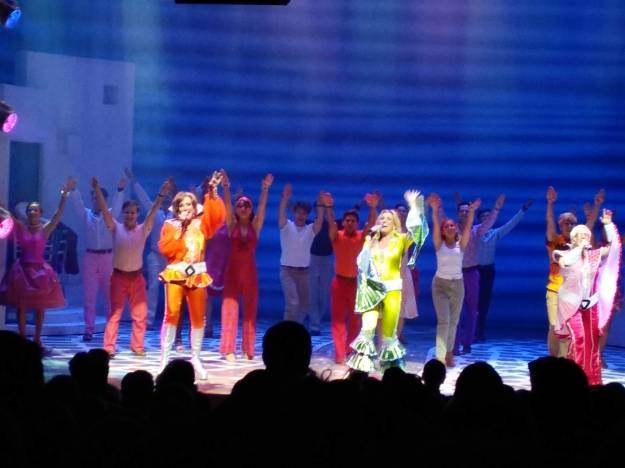 The pace for our day on the South Bank was a bit slower. We began with a morning walk through the Borough Market to watch the vendors prepare for the day. Next, we passed by the Globe Theatre and visited the Tate Modern following an enjoyable one-hour tour. The view from the 10th floor was spectacular not only because of the downtown London vista but also because you could get a peek into the impeccably furnished flats of the high-rises next door. We followed a quick look into the Imperial War Museum by spending a few lazy hours in The Kennington Coffee Shop. Here, while sipping lattes, iced coffees and iced teas, we chatted with several regulars about politics (Trump and Brexit), life in London, past travels and future plans.

The Kennington Coffee Shop
At the Tower of London, the Crown Jewels took center stage; however, equally intriguing was learning about the prisoners detained there, its one-time impressive collection of royal beasts ranging from lions to polar bears, and the 2014 art installation, Blood Swept Lands and Seas of Red, to commemorate England’s fallen soldiers from WWI.
We ended our week with a walk through the more affluent South Kensington district where we popped in to see the food selection at Harrods. We visited the magnificent Natural History Museum only for a brief time just because we had lost stamina for museums. (Something for the next visit!) At the Lebanese cafe, Noura, we relaxed a bit and tried a new drink. Jallab is a wonderful concoction of grape molasses, dates and rose water topped with pine nuts that tastes as great as it looks!

Lebanese jallab
What were those vacation surprises we mentioned?
On our first day in London, we encountered a rather large surprise. We walked early in the morning to Buckingham Palace to watch the changing of the guard, completely unaware that it was the day for the Royal Air Force 100th anniversary celebration. Not only were we able to see military parades and the flyover of 100 planes, but we also saw the entire Royal Family watching along with us from their palace balcony. 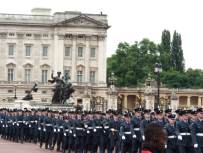 Royal Family
We did make it another day to watch the changing of the guard. We waited an hour at St. James Palace with just a small crowd. After watching the ceremony there, we walked up the mall to Buckingham Palace alongside the guard as they played music. As we got closer to the palace, it was more crowded and difficult to see, but we felt like we were able to see more up close this way than if we had watched only from Buckingham.

The changing of the guard at St. James Palace

The British Library’s Treasures collection preserves awe-inspiring history. We entered a very unpretentious room to find displayed the original Magna Carta, the Gutenberg Bible, Handel’s handwritten Messiah, a notebook of Da Vinci’s ideas and sketches, and so much more. It’s a small, quiet space where the crowds are manageable. So happy we hit the history jackpot with this discovery!
Dining surprises included Beijing Dumpling where there is a line out the door for a reason and Sutton & Sons where traditional fish and chips are served in an interestingly diverse neighborhood. The creamy, vegan, bourbon and toffee milkshake at @cookiesandscreambakery is reason enough to return to London soon!

Automatic translation of the blog